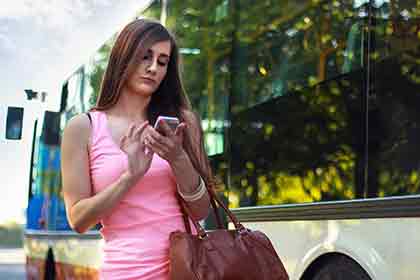 One of the beautiful Colombian women seeking men in her phone.

One of the hassles of online dating is “the getting to know each other” stage. At times, it can be hard to figure out if there’s something between you two or not, which is even harder to tell when you’re dating a Latina online.

If you’re having a hard time figuring out whether the feeling is mutual or not, it helps to look out for these signs:

If she makes an effort to respond (and her responses aren’t monosyllabic), then she’s definitely interested. The fact that she’s engaging in conversations shows that she wants to know you as much as you want to know her. So her regular response is definitely a sign that she’s into you.

Whether you meet Colombian singles in person or online, some of them tend to be shy. They might not be direct in trying to know your marital status, so they go about it by mentioning your so-called girlfriend.

Of course, there are Colombian women seeking men who would be more direct with their approach. Either way, you can take that as your cue to reveal that you are, in fact, single. You can also take it as a clue that she is interested in you.

Aside from replying, if there are times when she starts the conversation—and even cracks some jokes every now and then — take it as her way of keeping your attention. Women who aren’t interested won’t give men the time of day.

To avoid being rude, they might just give you one-word answers. So if you find yourself stuck in a lively and engaging conversation with her, there’s a big chance that she’s definitely attracted.

The whole point of messaging online is to eventually meet in person. If she doesn’t reject the possibility of a date, that’s another sign she’s interested. However, if she comes up with convenient excuses, such as not wanting to rush or enjoying what you have now, you might want to move on to someone else.

You can definitely tell when you two have chemistry based on your banter. How does she respond when you compliment her? Does she compliment you back or just says thank you? A bigger tell would be how she responds when you actually flirt. If she plays dumb, then perhaps she isn’t as interested as you thought.

Spotting just one of these signs is not enough to determine if she’s interested. If you spot these clues in clusters, that should help you determine whether she’s attracted or not. Think of them as your checklist whenever you start communicating with a new woman.

But just because she’s interested doesn’t mean you should no longer put any effort into keeping her attention. If you want to end up marrying a Colombian woman, you have to do all it takes to learn how to make a Colombian woman fall in love with you.